May is Melanoma Awareness Month

The number of patients being treated for sunburn is much higher this year. It's a common problem that dermatologists treat during spring because patients undermine the magnitude of the sun's rays since they haven't seen it much over the winter season.

Wearing sunblock and UV protective clothing shouldn't be based on temperature. Anytime the sun is out, you can get a burn, even on the cloudy, spring days. It is crucial to protect yourself against the harmful sunrays that lead to sunburn, sun damage, age spots and event skin cancer.

While the symptoms of sunburn may be temporary, the skin damage is permanent and sometimes invisible. Sunburn causes visible signs of aging, sun poisoning and increases a person's risk for getting skin cancer, including melanoma, one of the deadliest forms of cancer. Severe and/or multiple sunburns, at any age, increases the risk for developing skin cancer.

I was a guest on  TV 13 WHAM ABC & Fox Rochester's morning show to warn viewers about the danger of sun damage during melanoma awareness month. 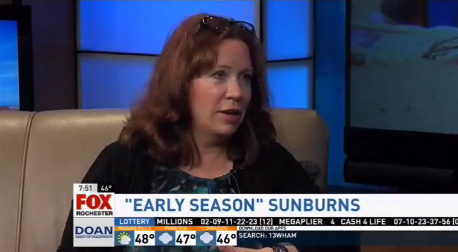 We’re located at 500 Helendale Rd in Rochester, NY and open Monday through Friday.

Feel free to call us at 585-266-5420 during regular hours, or write to us confidentially through our website’s secure contact page.

by filling out the form below and we will send you a surprise on your birthday!

NO THANKS, I PREFER TO KEEP BROWSING